Why do we get teary-eyed when leaving Amanpulo?

Is it because any departure from this island is an act of ‘returning to reality?’ It certainly has that appeal because even a short 4d 3n stay gives one a legitimate reason to escape from reality and, even by choice, disconnect from the real world which then makes the flight out – and boarding the plane alone – a reminder of the truth that the best things indeed don’t last because if they did, they wouldn’t be the best anymore (inspired by Barbra Streisand, somehow).

Pablo now running around the hangar lounge before departure

Is it because you get used to the kind of service that is unparalleled fromp pre-arrival arrangements to the arrival formalities and rituals including people who seem to know you just enough to call you properly by name, welcoming you back to the island and being warm like meeting an old friend, to the day-to-day upkeep of your casita that is impeccably brought to order, spotless and even personalised according to how, as it seems, the staff understands you and your needs, to the checkout and departure formalities that include seeing your guest assistant, management team and all those who truly wanted to send you off (some really make it a point to go out of their way to say goodbye and see you soon, some even hug and kiss, again like old friends leaving each other for now) wave their goodbye as your plane takes an inch off the ground en route to Manila?

Still amazed each time we see cold bottles of water waiting for us in the club car – how did they know we would be leaving the casita around that time?

Is it because of the seemingly effortless beauty of the place and the warmth of the people making it even more special? There is a cast of thousands that make this place beautiful – edit – even more beautiful (because the no-exaggeration powder white beach and clear, pristine waters are already beautiful as-is, one could argue), yet you don’t see them run the show as though they were stressed to bits. In the rare occasion that you would see them working, you would appreciate how effortless everything seems to be, which is strange because the place tries very hard to please yet doesn’t impose itself upon you as trying too hard. That’s partly where the magic is.

Pablo’s monkey plushie is staged under the sheets on our last night. The housekeeping staff moves it around the casita on turndown so it’s never found on the same spot every night

Is it because, on third visit, the place has known enough about you and has been witness to your growing family that it has surprising touches like the main waiter confirming, even after five months since the last visit, if you would like to have a large bottle of sparkling water; your guest assistant who has exhibited authentic fondness of your son that when you see them together it is like watching your son meet an old time playmate; is it because the place knows your style already that the housekeeping staff would tuck a large towel on top of the baby’s bedding because they know already that you would use it to cover the sides of the crib so that the baby is not disturbed by lights at night?

It rained on our last sunset on the island. But no rain could take away the fun of being with family

Is it because our trips to this place have always been accompanied by reasons to celebrate which  are then followed by only beautiful memories befitting the place? And to leave it is to somehow put an end the pleasures of celebrating? 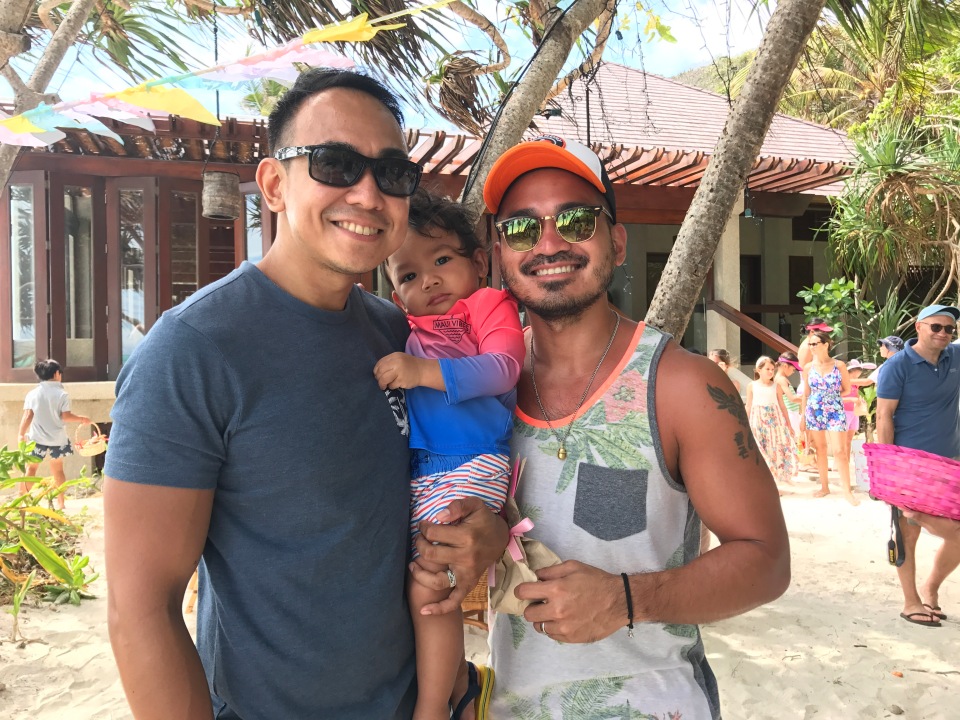 Easter Egg Hunt with Pablo at the Lagoon Club beachfront

There are indeed many things that could make you teary-eyed when leaving Amanpulo and all the reasons above are true to how I – or we, including perhaps Pablo – felt as the plane was taxiing around and we were looking back at the Amanpulo staff waving even way after the plane’s wheels have gotten off the tarmac. 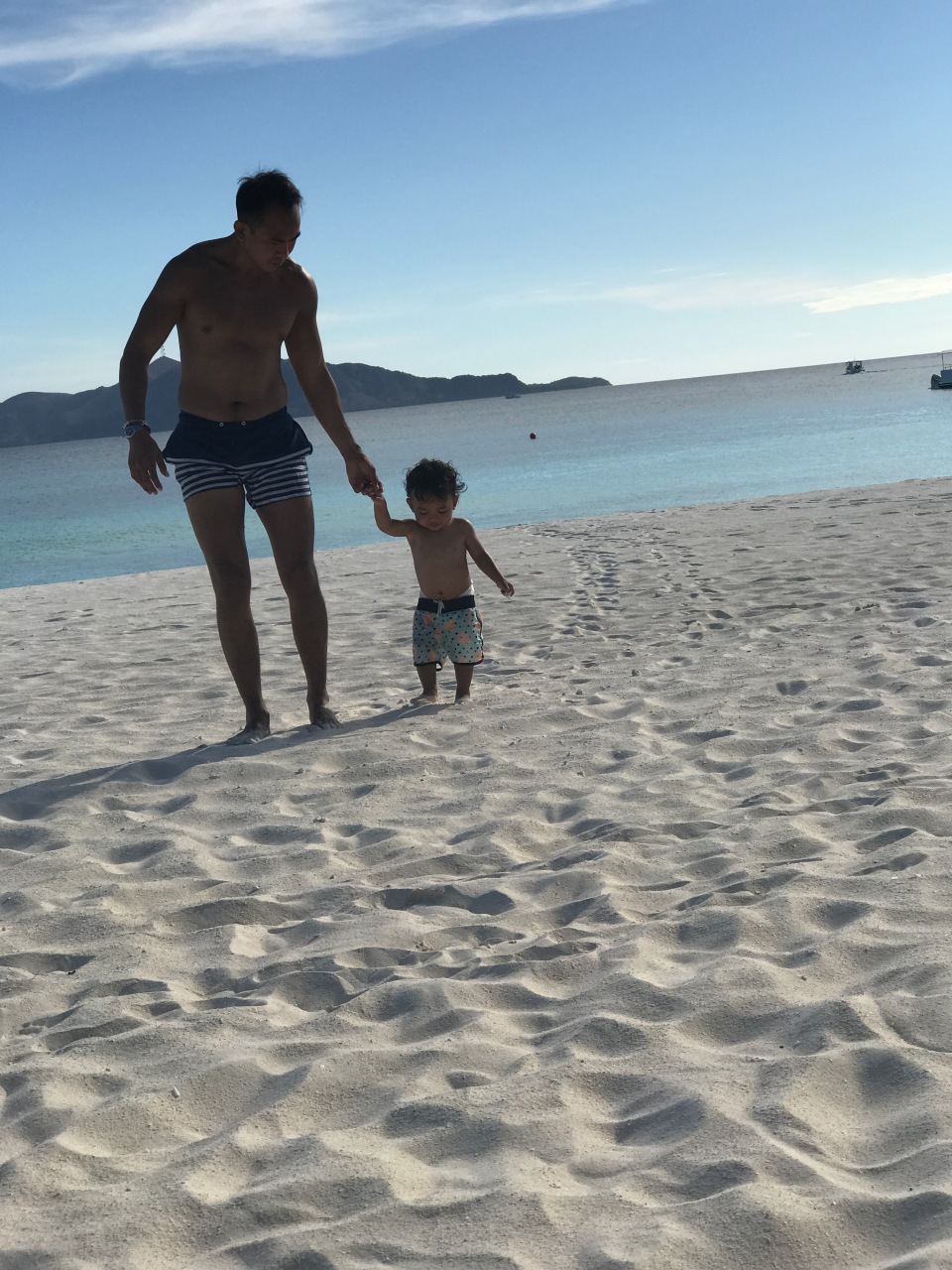 These moments are golden – priceless.

It was a truly memorable visit – much like the first and the second time we did – but quite more special being with Pablo who now runs around and enjoys playing at the beach, and having celebrated Rhex’s birthday this long Easter weekend on the island. We sure look forward to visiting again, hopefully some time soon!

This site uses Akismet to reduce spam. Learn how your comment data is processed.

I am a 37-year-old communications and strategy practitioner with over 15 years of industry experience in the private and non-profit sectors. I enjoy seizing challenging opportunities for the company to grow through strategic and execution excellence, bringing an exciting blend of creativity, rigour, and curiosity to solve problems and seize opportunities. Getting even the most difficult things done and seeing teams succeed gives me a great sense of purpose as a leader.

#Preonic gone #ube with cheese
Oh, may pasok na bukas. Ready to rumble? 💪🏾Takits!
That was a good night for A/B testing. 🎧x🍷
Got us jealous. Kiddo's off to a Fall Vacation. He's got a three-week academic break. 🍁😅
Ouais j'ai fini pour aujourd'hui ! —Pablo
What matters more is your inner pride in who you are and not about what others expect you to be or not to be or do. National Coming Out Day ought to be that celebration of personal freedoms, which include the freedom to choose whether to be out or not. Whatever that choice is, know that you are intrinsically good, immutable, unrepeatable. Celebrated. ⭐
#LeniKiko2022 realness. Among all the VPs, with and without bias, I am assured of yet another great OVP under the leadership of @kiko.pangilinan. 💚🇵🇭 #KikoVPKo #VPKoSiKiko2022
Smile because tomorrow your body will be sore af